Another BBC production that has inspired this topic.


Australasia  is across the waters from Indonesia. Southwest of  Indonesia there is an Island called Sulawesi. It is the third largest Island  of Indonesia. On this Island the indigenous people were and still are called "Bugis" and their history goes back 2500 B.C.E. Bugis is an exonym which represents an older form of the name (To) Ugi.~~which is the endonym.

The Bugis were converted from their indigenous animistic practices and beliefs to Islam in the 17th century. We can characterize their  original form of their belief system as "Spirit worshipers". What is Spirit worship you ask? After all, ~~  the concept  of spirit exists in all religions in one way or another.

Here is my opinion on the matter. ~~ you may have your own:

Spirit worship is widely understood as nature based. It is spirituality in it's rawest form. Humans in the beginning of mankind, long before structured religions existed, ~~  recognized  forces much greater than them. They viewed them as Gods or spirits,  much like Greek and Roman  Mythology.  They  believed they could communicate with them and  tried to gain their favor with various rituals. Certain humans were recognized as Mediums. Some of those rituals involved life sacrifices.

I Suspect that the traditions of the indigenous people of all counties are never forgotten and that they will always be part of their life. In some cultures, it would be disrespectful to their ancestors if certain rituals are not remembered and practiced.

Take for instance, The Native Americans who live at Taos Pueblo in Arizona USA are 90% Catholic. Having said that, they still have their medicine wheel created by stones where they gather  which is otherwise known as "the sacred hoop" The Native Americans used this for astronomical rituals for healing and for teaching purposes. This does not seem to interfere with Catholicism or at least I am not aware of conflicts as  neither the government of the US nor the church interferes with Native American's traditions.

I know  Eastern Christianity believes that Spirit Worship is heresy and some corners of Christianity it would be considered Satan worship as the only spirit recognized is the Holy spirit from the Holy Trinity.

The Catholic church in Spain was guilty of massacring  the indigenous Indians in South America in the 18th century when the indigenous did not agree to become Christian at the plea of the Jesuit Missionary efforts. In fact a movie was made of this event called "The Mission" with Liam Neeson, Robert De Niro, etc. Then again, Religions have a terrible history of wars in the name of their religion.

I am not here to bash or judge any religion. I am here to share the heart beat of the ancient religions and how some have survived in the 21st. century. To be opened to the evolution of spirituality.

I believe that what is most important for the heart and soul of humans is not just to be good and respect mankind but more importantly be held accountable for the negative energy or what some religions characterize as Sins committed against all life on the planet. We will be judged more for the "Sins" then all the good we have done. Do not hide behind the Vail of the church to commit crimes on humanity . 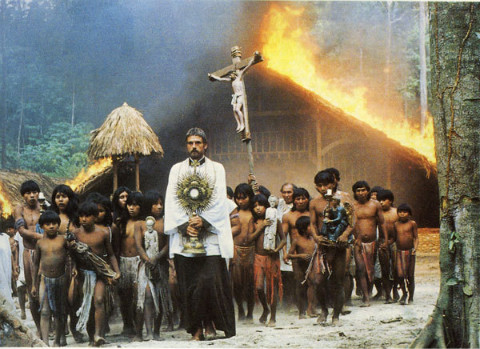 Peace, love and light to all!