FEAR AND RELIGION~~ANCIENT AND MODERN

I was motivated to address the notion that fear and religion share roots of the tree of humanity.  I have been approached by many people including followers of this blog to explain how, in any way, do the ancients have a place in our current world of religions.
Let's begin with fear
The emotion of Fear can come from not knowing or understanding an object or an event. Perhaps the greatest fear mankind has ~~ is the fear of death. I say, that this can be conquered through a belief system. Even then, if our faith is cluttered with too many rules and regulations, our faith may be challenged and little cracks and holes can penetrate your faith by your fellow man.  I believe we can find answers to this and many other conditions of mankind by looking to the ancient civilizations and their practices.
When man first walked this planet,  he immediately understood there is a force much larger than him. He realized that he had no control over this force. In the beginning there was little science available to explain nature. This caused fear and while these were no more than natural forces, he labeled these forces as Gods. He believed that if he treated these "Gods" well ~~ these Gods would treat him well. Man built objects in favor of his Gods. He built statutes and structures in honor of them. To better communicate with them.  Apollo was the God of the sun and while Demeter was the Goddess  of harvest,  Zeus was the God of the sky, thunder and lightning and so on. We have ancient places of worship like Stonehenge in England were Druids gather for the Solstices and celebration of Mother Earth. 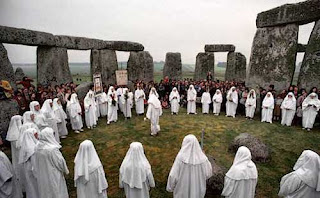 What is extremely interesting about this, is that the ancient man was correct  in respecting mother nature as even today the Sages and

Spiritual leaders of the spiritual world believe we are one with nature on Earth. Man's Consciousness affects Mother Nature.  Respecting Mother Nature does affect the world we live in. Today we seemed to have lost that respect.
The bottom line is: It was fear and respect that inspired polytheism.
Let's continue with modern Religion
Now comes modern religion. I say this for the Christians and monotheists (those believing in one God) Not for a second do I believe that Jesus Christ is a member of any church, nor God, his father. Religions were created by man, based partially on traditions, ecclesiastical history and his interpretation of holy manuscripts, Bibles, etc. Man recognized the need to distinguish Good from Evil. That has been the challenge "Du Jour" in the everyday life of man. Every day man has been faced with making choices, all of which could affect his life at that moment and forever thereafter. Therefore a system was needed to set in place for guidance and inspiration. It was man who created Canon law and dogma.
It is a sad fact, but true, that once man created canon law for his belief system, man created what I perceived to be a demon. Look at the religiously sanctioned military campaign throughout all the religious world with the Crusaders.  More people were killed in the name of religion than all the wars put together over a period of 200 years during the middle ages. Note the movie "The Mission". Based on the true story about the slaughter not only of the aborigines Indians of South America but also killing of Jesuit priests who would not conform to Portugal when Spain ceded the Jesuit Paraguay to Portugal. A church decision for politics.  What a shame and waste of life!


Still today, some countries are  fighting in the name of their God. In fact, some murders are committed in the name of their God.
Fear has become for some religions the foundation of their faith. Some societies actually advertize it so. "It is good you have fear", as it will keep you in line. You need to have the fear of God instilled in you! In other words, if you do not obey the written word you will burn in hell. Only when you comply with the written word, will you go to heaven. In some churches, love, peace and fear are mentioned as equal potions for salvation. Wow! What happened to the loving God some churches preach about, instead of creating Theophobia (fear of God in Greek).
Hypocrisy you say in religions
Most religions have adopted ancient traditions from the ancients, including but not limited from the Druids! For an example: Christian Easter is also celebrated with the Easter bunny and hiding eggs to find among spring flowers. A tradition from the Druids for Celebrating Spring. At Christmas time we have Santa Claus adopted from the Scandinavian Gods, Odin, father of Thor. Yet, what do they have to do with the Crucifixion  and birth of Jesus? These are the two holiest holidays in Christianity.
Otherwise the Christian church finds these mythological figures as sacrilegious in their own right.
Yes, ~~ I know this was a form of proselytizing of non Christians so they could identify with something within Christianity.

I believe fear has no place in religions. As I have said many times before: Some religious people  are afraid of death and going to hell while most spiritual people have no fear of death and have already experienced hell. I like the Philosophy of Metta from Buddhism which is an ancient religion, " True Metta is devoid of self-interest. It evokes within a warm-hearted feeling of fellowship, sympathy and love, which grows boundless with practice and overcomes all social, religious, racial, political and economic barriers. Metta is indeed a universal, unselfish and all-embracing love."
Excerpt taken from
Metta


The Philosophy and Practice of Universal Love