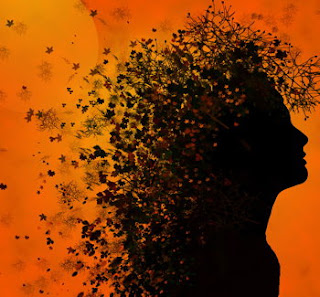 Autumn has officially arrived with the fall Equinox having just taken place. In my opinion the most colorful time of the year. Winter blankets us with white, ~~ summer with rays penetrating clouds and sunsets painting the edge of mother Earth. Then ~~ spring showing off all colors of floral life.

There is a scientific explanation how the leaves on trees  have such a stunning  transformation.  The leaves get their color form the abundance of chlorophyll from Mother Earth. The chlorophyll captures the light for photosynthesis. As the days grow shorter, so does the supply of chlorophyll which allows other pigments in the leaves to take over. The bright orange and yellow seem to soothe the body from the heat of summer and giving us a preview of the cold to come.

Science and Spirituality seem to butt heads at times.  Science deals with matter, the physical, ~~ while spirituality deals with the unseen and and is fueled by faith not by chemistry.

While there is a chemical reason why leaves change their color, I much rather have the romantic reason, that being for me ~~ "Mother Earth has changed her clothes in preparation for the long nights ahead".

Even scientist have to sit in awe of our creation and realize that there is a much greater force than us. That force of nature made the alchemy which makes the physical world what it is today. 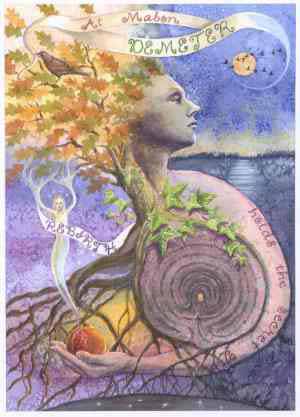 Mabon is another word for Fall Harvest, more commonly used among Wiccans associated with Welsh  mythology.

The most popular fall harvest story is that from Greek mythology.This is the story about Demeter and her daughter, Persephone. Demeter was the goddess of grain and of harvest in ancient Greece. Her daughter caught the eye of Hades, the God of the underworld. When Hyades abducted Persephone and took her back to the underworld, Demeter's grief caused the crops on Earth to die and go dormant. By the time she finally recovered her daughter, Persephone had eaten six pomegranate seeds and so, ~~ was doomed to spend six months of the year in the underworld. These six months are the time when the Earth "dies", beginning at the time of the Autumn Equinox. Each year Demeter mourns the loss of her daughter for six months. At Ostara, (Spring) the greening of Earth begins once more and life begins anew.

There are many interpretations of this mythology including Demeter threatening Zeus to kill all vegetation on Earth if Zeus does not help in releasing Persephone from the hands of Hades. Zeus, ~~ not wanting to anger his people complied and convinced  Hades to release Persephone.

Another version is that Persephone on her on volition remained  with Hades  so she could bring brightness and light to the souls doomed to spend eternity with Hades.

Regardless how you perceive this time of the year, enjoy the season and harvest your love for your fellow man. May your cornucopia of life be full of spiritual nutrition

Be well in Love and Light!