On August 3 1990 President W Bush Declared the Month of November as Native Amercan Heritage Month.The Bill read in part that the people of the United States observe this month with approppriate  ceremonies and activities honoring America's Tribal people.

What I found interesting is the choice of the month as November, the time of Thanksgiving at which time the Pilgrims reportedly sat down together with the Native Americans to eat and celebrate in unity and peace and was thankful for their life. You will recall  that I created a post on Thanksgiving when I wrote about the dark side of how the native Americans were treated.

Below is a link to that post. You will have to copy and paste or browse through the index of this site to see it. 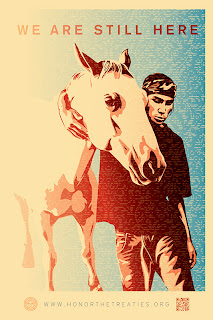 Even today I come across people who criticize the first people who   are given money  and land by the government as restitution for the worst genocide known to mankind.   There are still European Americans who are predigest against  our first people. I am pleased, however, that President Bush has made an effect to encourage awareness of our Native American traditions and culture. After all, these are first people. It is my prayer that all indigenous people around the world have such an opportunity.

I am blessed to have so many native American friends

Be well in light and love